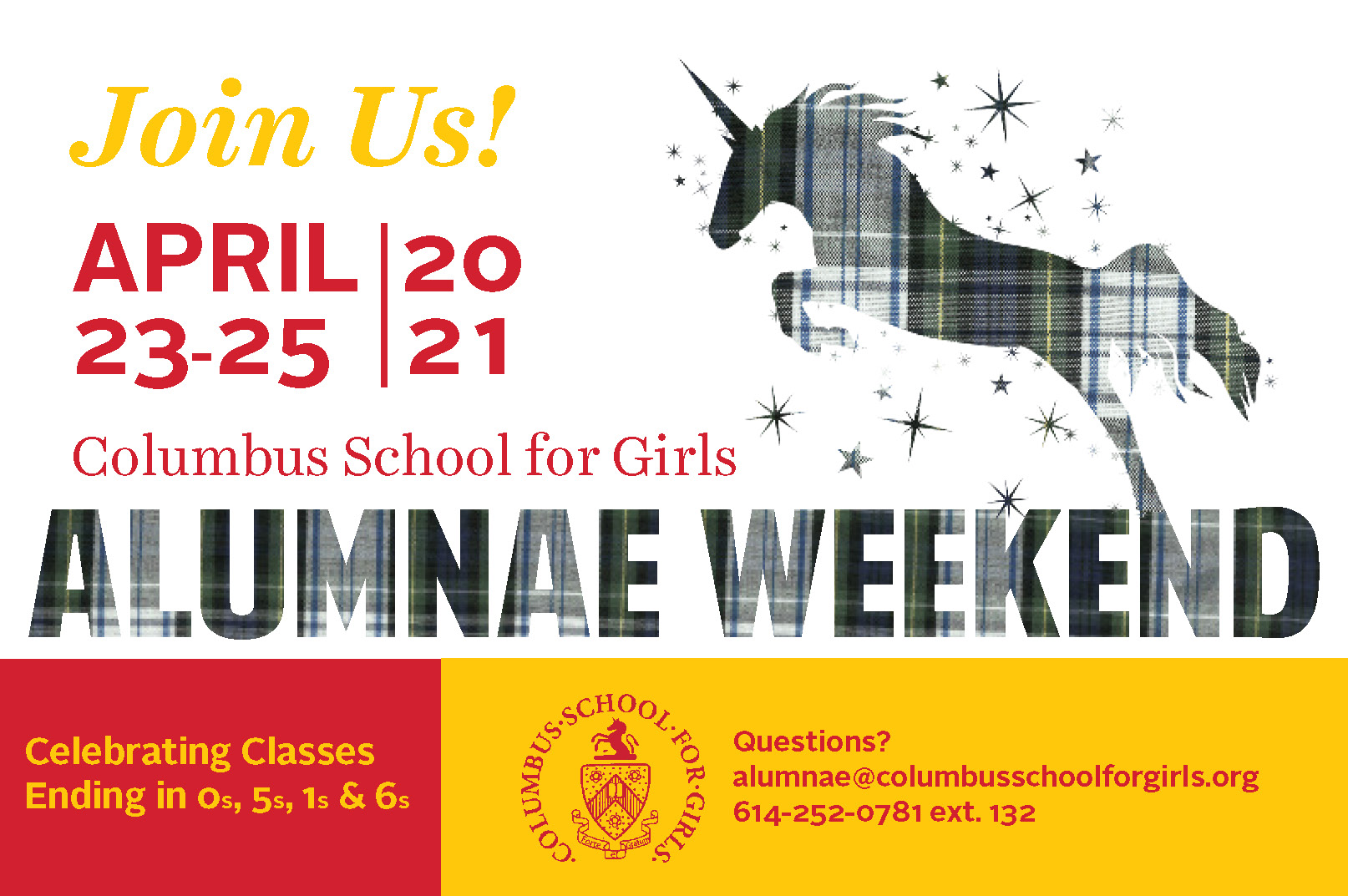 Thank you to the more than 100 alumnae, from the Class of 1951 to the Class of 2012 and many in between, who participated in our virtual Alumnae Weekend 2021! For those who were unable to attend, or want to revisit a favorite session, please visit here to check out recordings from the weekend.

Throughout the weekend, we:

Columbus School for Girls is proud to announce that Kimberly Lowe Henderson ’91 has been selected as the School’s 2020 Alumna of the Year.

The CSG Alumna of the Year Award celebrates a CSG graduate who represents the highest principles of CSG, and through that display, has made outstanding contributions in her area of endeavor. As a statewide leader and advocate for girls and women, Henderson consistently meets and often exceeds those standards.

Henderson graduated from CSG in 1991 before earning a bachelor’s degree from Columbia University and a juris doctorate from Fordham University School of Law, both in New York City. Appointed by Ohio Governor Mike DeWine, she is currently Director of the Ohio Department of Job and Family Services (ODJFS), a $3.7 billion agency with approximately 2,200 employees. In her role, she directs the supervision of the state's public assistance, workforce development, unemployment insurance, child and adult protective services, adoption, child care, and child support programs.

Before taking the lead at ODJFS, Henderson was the Senior Vice President of Administration and General Counsel at Columbus State Community College. There she provided executive guidance on college policy, administration, and strategic initiatives. Prior to joining Columbus State, she served as Deputy Chief Counsel for Attorney General Mike DeWine, managing chiefs of six sections: Taxation, Workers’ Compensation, Civil Rights, Contracts, Public Utilities, and Education. She also served as Deputy Chief Counsel for the Ohio Department of Education. Early in her career, Henderson practiced as a staff attorney in domestic relations and juvenile court, and as a labor and employment attorney with the Vorys, Sater, Seymour and Pease firm and the Littler Mendelson firm.

In 2014, Henderson founded the Olive Tree Foundation for Girls, a nonprofit organization, which provides scholarships, mentoring, and enrichment programs for young women attending CSG. Inspired by her own CSG experience, Olive Tree helps students to build connections with each other and women leaders throughout central Ohio, while also filling the gap between tuition assistance and expenses that traditional financial aid does not typically cover like uniforms, books, tutoring, athletics, class trips, technology and more.

“It’s surreal,” Henderson said. “I certainly never thought I would end up being CSG’s Alumna of the Year, but I am honored. CSG definitely prepares you to be a leader in whatever it is you decide you want to do, whether it is the decision to lean into being a mother or a director or CEO. My CSG experience instilled in me true confidence and a lifelong love of learning.”

“Kimberly Lowe Henderson is the epitome of a CSG student who became a woman of action,” said CSG Head of School Jennifer Ciccarelli. “We are inspired as we witness how she empowers and encourages the girls who will one day join her in leading our communities. It will be an honor to recognize her accomplishments and the lasting impression she has had on so many CSG students.”

Henderson will formally accept the award at an Upper School assembly during CSG’s Alumnae Weekend on Friday, April 23, 2021 at 4:30 p.m.

Welcome to CSG Connect, a new, exclusive networking platform specifically for CSG Alumnae to connect with each other, current students, and other members of the CSG community.

Through CSG Connect, CSG graduates can: